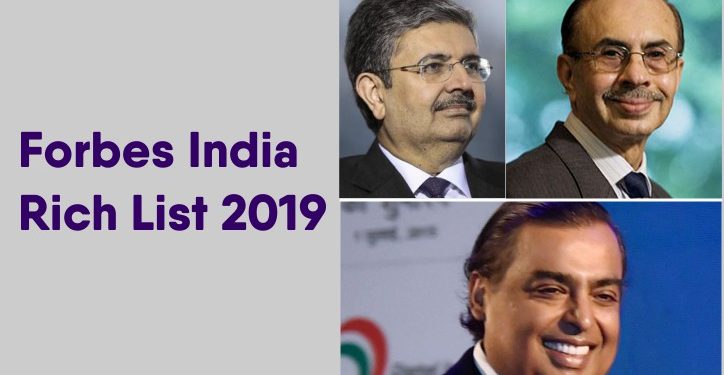 Despite many challenges and downfall in Indian economy few business leaders mark big achievements in their wealth. Again Mukesh Ambani tops the list of “Forbes India Rich List 2019”. Gautam Adani spots 2nd position, His business networks expanding, recently he got approval to start work on an Australian coal mine. Below is a list of top 10 leaders who ranked in Forbes India Rich List 2019.

Very famous and well known name, Mukesh Ambani continuously ranked at first postilion in “Forbes India Rich List 2019” since last 11 years. Mumbai Maharashtra based out tycoon Mukesh Dhirubhai Ambani is Chairman and Managing Director of Reliance Industries. His current net worth is USD 51.4 billion. He was born in April 1957, He got “Young Entrepreneur of the Year” award in year 2000 by Ernst & Young India. His ‘Jio’ has become top player in Indian telecom sector in just 3 years ( Jio is publicly available from 5 September 2016) of time, Jio added USD 4.1 billion to Mukesh Amabani’s total net worth. Mukesh Ambani is currently board member of ICT Mumbai, board chairman of Reliance petroleum, Chairman of Reliance retail and President of Pandit Deendayal Petroleum University, Gandhinagar, Gujarat etc.

Gautam Shantilal Adani is well known Indian billionaire, In the “Forbes India Rich List 2019” this year he spots 2nd position with total net worth of $15.7 billion. Gujrat India based, Gautam Adani is a founder and chairman of Adani Group. Adani group is working on many sectors including Agri Logistics, Coal & Mining, Airports, FMCG, Gas Distribution, Real estate, Power distribution, Solar Power Generation, Logistics, Housing finance and more. Recently he got approval to start work on an Australian Coal mine.

Shiv Nadar was born is July 1945, is an industrialist and philanthropist. Shiv Nadar spots at 6th position in Forbes Rich List 2019 with net worth USD 14.4 billion. He is founder and chairman of IT giant HCL Technologies. Mr. Nadar was awarded Padma Bhushan in 2008 for his effort in empowering IT and technology in India.

Lakshmi Mittal is well known for steel magnate, he is chairman and CEO of ArcelorMittal, ranked at 9th spot in Forbes India Rich List 2019. He was born in June 1950 and completed his B.Com degree from St. Xavier’s College, Calcutta. He is also  Co-owner of Queens Park Rangers. Mr. Mittal got Padma Vibhushan award in 2008.

Wi-Fi 6: India Gears Up for the Next Generation of Wi-Fi Technology

Future of Cyber Security in the times of work from home

How to protect against insider threats: CyberSecurity practices